Peru’s cultural diversity means that the Spanish spoken there borrows from many different sources. Indigenous languages, Spanish, and Asian influences mix together to produce a rich culture to only in food and customs, but also in language. Dialects of Spanish-speaking Peruvians vary across geographical locations. With migration from the mountainous regions of Peru, where Andean Spanish is the main dialect, to Lima, the mixing of dialects produces yet more slang.

Learning some of the words exclusively used in Peru gives you that extra connection and access to 30 million Spanish speakers, the fifth most populous Latin American country. Lima, being the capital, and most diverse city with a quarter of Peru’s population, is a rich source of slang terms. We don’t recommend peppering your speech with slang straight away. Learn to be comfortable with the dialect and slowly introduce some words in context.

It’s always best to try out new words with friends or acquaintances, especially those that don’t offend easily. Using Peruvian slang words and phrases out of context or in the wrong company can lead to problems, just like in any other language. As a non-native speaker, you will be given some credit for trying, and most people will find it comical, rather than offensive, to hear a rude word out of place. However, caution is advised.

You will no doubt hear this one quite a bit. A su is a contraction of the phrase “A su madre”, and is a little more polite. Often used to express surprise, disbelief, or resignation, it literally means “To his/her/its”. A su madre is used just like “Wow” in English. “To your mother” would be one direct literal translation.
Be careful using this phrase outside of Peru. Any words and phrases involving someone’s mother may be construed as an insult in other dialects.

“You know”. This word can be used as a question (“¿manyas?”) or a statement (“¡manyas!”). Very commonly used word in Peru. Used mostly among younger people but you can hear this expression anywhere.

Rude/impertinent. Someone referred to as Achorada is usually a rude, aggressive, or forward person.

Player/Romeo/seducer. A gilero is someone who flirts with all the girls constantly, with the objective of seducing them.

To eat (verb). Ir a jamear means to go and eat. Jama is a word that also means food.

1 sol (Péruvian money). Not to be confused with luca in Argentina, Venezuela, Chile, and Colombia where the word means 1000 when referring to money.

Brother. A direct import from English. Used mostly by younger people, bróder is a cool way to refer to a close friend directly or indirectly.

To kiss. Also means “to catch”. Diego y Gabriela se estan chapando – (“Diego and Gabriela are kissing each other”)

Literally: “to suck”. Used colloquially to mean “to drink” when referring to alcohol.

Thief, robber. The same word is used in other Latin American countries and has the same meaning. El choro le robó la cartera – (“The thief robbed her purse”)

This sounds a little weird when you understand the literal definition of “pata”. Referring to your friend as your leg or paw, as in “animal foot”, is a term of endearment you’ll hear in Peru that shows just how far from the original meaning the colloquial terms can go. Pata in other Latin American countries can mean “leg” but in Peru it generally means “friend”.
Example: Juan es mi pata – Juan is my friend.

A cool Peruvian phrase to learn that you can use in situations where you need to estimate time for something to be done. Basically, “al toque” means “right away”, but you’ll soon find out that people are quite flexible with the definition. Don’t expect anything to be done immediately. At the same time, you can use the phrase to mean anytime in the near future.

Literally: to kill hunger. To eat something in the meantime until you can have a full meal. “Voy a matar el hambre comiendo un sandwich”. (I’m going to eat a sandwich to fill up my stomach a little).

To double-cross, to betray, to deceive. Peruvians use this when discussing unhappy love affairs. “Esa chica me sacó la vuelta con un amigo”. (That girl double-crossed me with a friend).

To look the other way, to pretend not to know. It might occur after someone gets bribed. “El policía se hizo de la vista gorda”. (The policeman looked the other way).

To trick or fool someone. It usually involves payments or deals. “El taxista me hizo el avión”. (The taxi driver fooled me).

Literally: to give a head butt. To rip off, to swindle. “En esa tienda me cabecearon”. (I got ripped off in that store).

Literally: to break someone’s hand. To bribe, to corrupt. It involves illegal payments to government officials for favors. “A ese congresista le rompieron la mano”. (That congressman was bribed).

To be drugged with sleeping pills and then robbed. It usually occurs in discotheques, carried out by pretty women called “peperas” who slip the drugs into the drinks of unsuspecting men. “Mi primo fue pepeado anoche”. (My cousin was drugged and robbed last night).

To smoke marijuana, an illegal but fairly common action in Peru. The weed is also known as “macoña, yerba, troncho”. “Había gente fumando marimba en la fiesta”. (There were people smoking pot at the party).

Literally: to shoot yourself. To inhale cocaine. Also known as “jalar”. It occurs among high class persons who can afford the drug and wish to carry on drinking but minimizing the effects of alcohol. Not so common as smoking pot and also illegal. “A un amigo mío le gusta meterse tiros”. (A friend of mine likes snorting coke).

Literally: a salute to the flag. An inconsequential or worthless act. It sometimes involves words or actions carried out by government officials to pretend they are doing something useful for the people. “El discurso del ministro fue un saludo a la bandera”. (The minister’s speech was inconsequential).

Literally: with no hair on the tongue. An idiom usually referring to someone’s unadorned, direct and unafraid words. “Mi amigo me contó la historia sin pelos en la lengua”. (My friend told me the story in straightforward words).

a) To realize, to know, to understand. “¿Manyas lo que te digo?” (Do you understand what I say?).
b) To eat. Slang word derived from the Italian “mangiare”. Also known as “jamear”. “¿Quieres manyar en ese restaurante?” (Would you like to eat in that restaurant?)

To smoke a derivative from the coca leaf known as “pasta” before it becomes cocaine. A highly addictive substance employed by the lower classes because of its cheap price and linked to criminal behavior. Users are known as “pasteleros”. “Habían hombres fumando pasta en un callejón”. (There were men smoking pasta in an alley).

To eat in a secluded, usually unexpensive restaurant but serving very tasty food. Huariques are known only by locals and offer an interesting alternative to tourist traps. You’ll need someone to take you to one because they are not well known by most people. “Comí muy rico en un huarique del Callao” (I ate very well in this huarique in Callao city).

Literally: to act as a cow. To miss work or school classes due to lazyness or to have a free day. “Mi compañero se hizo la vaca el viernes”. (My classmate missed classes on Friday).

Literally: to toss firecrackers. To effusively praise someone. “Me tiraron cuetes por mi trabajo”. (I was highly praised for my job).

To be broke, usually temporarily due to overspending. “Estoy misio después de mi viaje a Europa” (I am broke after my trip to Europe)

To adopt the looks and behavior of Anglo Saxon white people. “Él está muy agringado después de su viaje a los Estados Unidos”. (He acts like a gringo after his trip to the United States).

To carry out a temporary job, usually unskilled and informal until you can get proper work. “Hago cachuelos para sobrevivir” (I do any temporary jobs to survive). 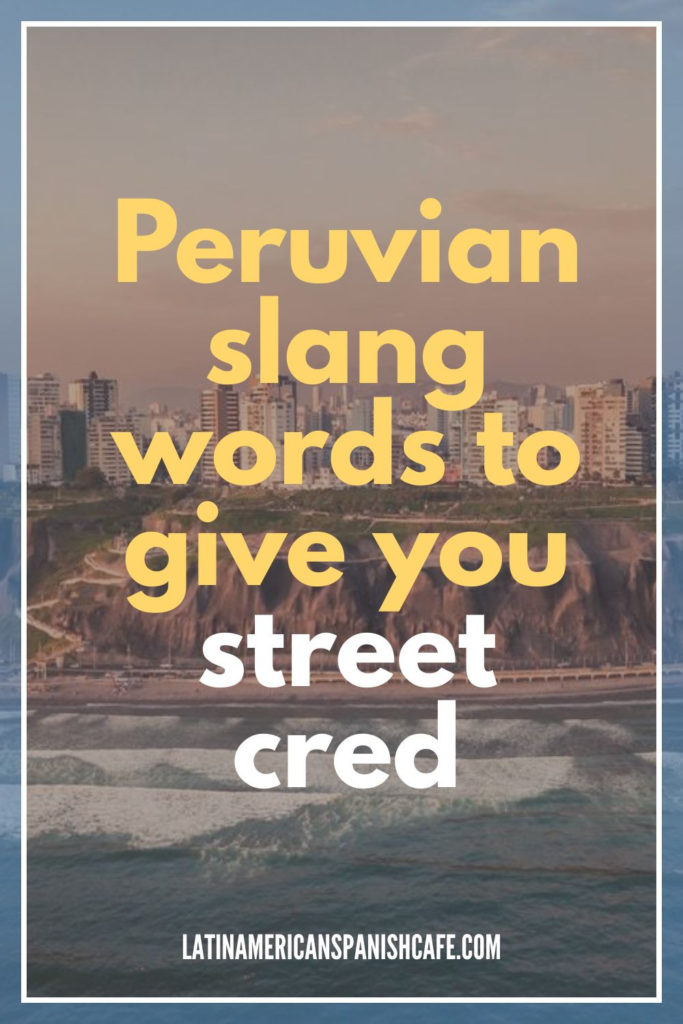