Mondly and Duolingo sit atop the heap of language learning apps. They both have a fantastic set of options in terms of daily lessons to learn a new language, and both promise to help develop your basic language skills using a gamified structure so you can learn faster and stay engaged with the process.

In this Mondly and Duolingo language learning app review, we’ll look at both products and help you tease out the differences to find out which will best suit your needs. If you need an in-depth review of Mondly vs Duolingo, read on!

Similarities Between Duolingo and Mondly

Both apps focus on the basics, especially with their free platform. They both help users build simple skills in various contexts, with lessons on vocabulary, quizzes, and pronunciation. Mondly offers a free version with somewhat limited depth, but their per month plan at $9.99 (or $47.99 for an annual subscription) goes quite a bit further.

Duolingo also has a paid plan, but they also keep all of their content free and ad-supported. The paid program at $12.99 per month, $47.99 for a half year, or $79.99 per year allows users to take their lessons offline, get more lessons in without waiting, and access the content ad-free.

Long story short, both apps can get you some measure of competence with or without paying money, and both key in on the essential skills for learning a foreign language. They both work exceptionally well for English speakers learning Spanish.

The Different Ways to Learn a Language with Mondly

Mondly takes a unique approach to building basic skills in terms of the interface. They offer beginner, intermediate, and advanced difficulties in their lessons. From the home screen, a path appears along which you can choose between different contexts (i.e., core vocabulary, food and drink, public transportation, chatbot, etc.). However, unlike other apps where you need to “level up,” you can jump around a bit more on Mondly.

This has its advantages. For instance, Spanish learners coming into the lessons with a little more familiarity with food and drink might want to skip that section and jump ahead to another context where they have a lower baseline.

One of the most significant differences for Mondly is the different types of lessons they deploy. Like other apps, it tests reading and writing skills with multiple choice and speech recognition. However, Mondly goes a step further than other apps with an integrated augmented reality experience.

Mondly’s AR features bring the lessons into the real world. Using your phone as a lens, virtual reality characters pop up on the screen to ask questions, and you either speak, type, or select a phrase in response. The speech recognition technology in Mondly is superb, and engaging in a more immersive setting adds a realism that taps into the need to practice the language in “real life.”

The Different Ways to Learn a Language with Duolingo

While Duolingo lacks the fancy AR element of Mondly, it does have a tried-and-true method, especially for English speakers interesting in becoming competent Spanish learners.

Users build their skills slowly. Duolingo makes you master a given skill or set of vocabulary before moving on to the next lesson. Some lessons require you to identify the correct spoken word from a list of written words, while others test your pronunciation with speech recognition software.

Duolingo also offers a chatbot feature, where users engage in a text conversation with an AI partner. The chatbot feature aims to bridge the gap between basic vocabulary and reading comprehension and actually speaking and reacting to a native speaker and native language. While Duolingo doesn’t have chatbot settings for all its languages, it works very well for English to Spanish.

The structure of having to build language skills in a specific order gives Duolingo users a sense of achievement with every successful trial. They also go into more detail, especially for Spanish, on the language’s actual grammatical underpinnings.

For some learners, having that almost-mathematical understanding of how a language builds sentences makes it much easier to learn and converse.

Duolingo also has a forum for discussing language learning with fellow users. Sometimes it helps to bounce challenging concepts off of other people, and with so many people using the app (and the forum), it’s easier to find someone who can help with your particular challenges.

Good for Learning the Basics of Many Languages

Both apps have expanded their offerings to embrace many different languages, but they differ in which ones they emphasize.

Duolingo, at least for now, seems to have a stronger offering for Spanish than most of its other languages. It takes a much deeper dive into the basic grammar and things like conjugation than Mondly.

Duolingo also offers 38 different languages compared to Mondly’s 33. A big difference for Mondly, however, comes in how they translate from one language to another. Duolingo has some limitations on which language can be learned from which base, but Mondly allows for any of its languages to be used as a base.

That functionality might factor into a Spanish learner’s decision on which app to use if they have fluency in another language that might help them better understand Spanish.

Neither app will have you completely fluent in any language without a little extra work outside the app, but both can give you at least something to help you get around another country reasonably quickly.

Find the Best Language Learning Software for Your Needs

A critical factor in considering which software to choose lies in knowing what you need. You might want to figure out what style of learning works for you. If you have a more kinesthetic style, you might respond better to Mondly’s enhanced AI interface.

You’ll also want to consider why you want to learn Spanish. Do you just need a few phrases to get you through a vacation, or do you want to really understand the language’s construction? For the latter, Duolingo does a slightly better job laying the foundations.

Many Spanish learners combine Duolingo or Mondly with other means to learn Spanish, from formal classwork to online language learning tools like Rosetta Stone, italki, Preply, or Babbel. If you have different methods to get your learning in, you might not need the paid services of Mondly.

Likewise, you might have a lifestyle where you spend a lot of time on the go. Duolingo’s most robust features come on its desktop app, giving it some limitations on mobile. Mondly, on the other hand, has a desktop app, but it has no difference from the mobile app.

When it comes to learning foreign language concepts, Duolingo certainly comes out ahead – at least for Spanish learners. The structured approach to vocabulary and deeper dives into grammar gives it real strength in learning and building language.

However, Mondly’s more powerful speech recognition software gives it a slight edge in actual language production. Understanding a language is excellent, but if you want to get around in a second language, you need people to understand you also.

There Are No Shortcuts to Learning a Foreign Language

The most important thing in learning a second language, no matter what app you use, is to actually use it. Learning Spanish or any foreign language requires consistency in practice. Both apps give push notifications to help keep you on track and tap into your brain’s reward centers by gamifying their lessons.

With that in mind, it certainly helps that Duolingo has a free version with access to all of its content, including podcasts and stories, to further your progress once you master the basics.

Mondly does a great job of creating engaging lessons that make it fun to learn, but some users respond better to a more focused and “tiered” learning that Duolingo provides. Both have their pros and cons; users just need to consider which style will keep them better engaged.

When it comes down to Mondly vs Duolingo, both apps can work great in the right contexts. For that matter, they even complement each other well. Mondly’s strength lies in its ability to provide conversational practice, while Duolingo brings a more traditional approach to the Spanish learning process. If user numbers are any indication of effectiveness, though, Duolingo takes the cake.

Check out this article, which reviews Mondly vs Babbel. Alternatives to Duolingo and Mondly include Memrise, Busuu, Babbel. Get 20% off uTalk with this link. 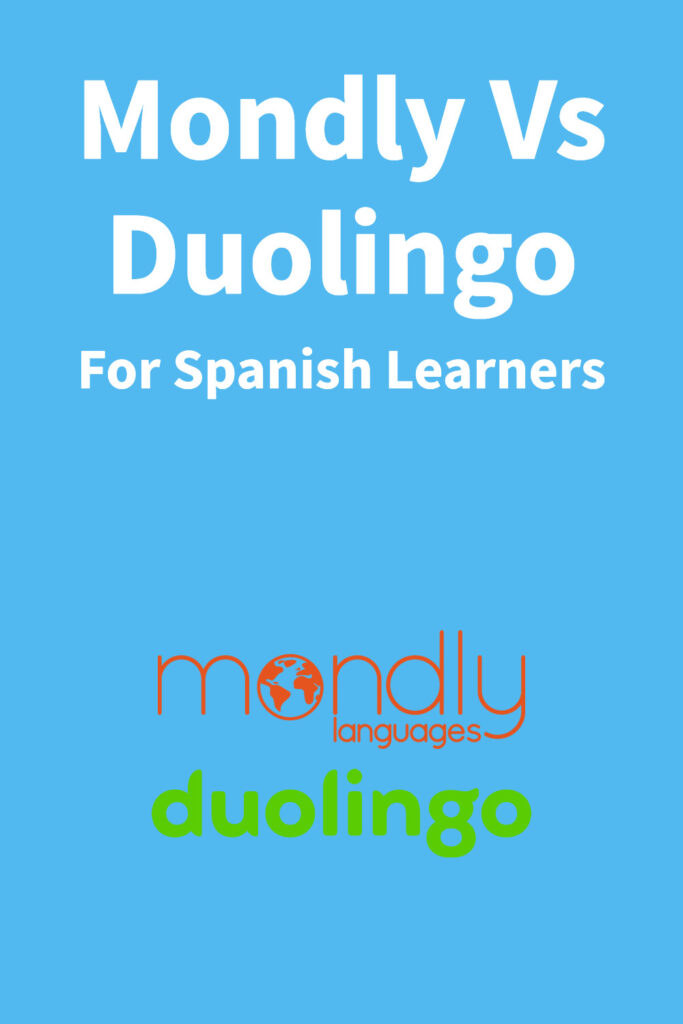